A year ago, we wrote some winter car storage tips on six ways to kill your classic. One of our points was that nonuse is abuse. For those of you who live up north though, this is easier said than done. Many of you may feel that a fuel stabilizer is necessary and use it to keep the gas intact during the winter. Fuel stabilizers are supposed to leave your gasoline fresh after winter sitting. Some prove to do just that while most prove to do nothing. However, some cause harm to your car’s engine. So how can you tell the best fuel stabilizers apart from the ones that are as good as poison?

To start breaking down the question of what can kill your car while it sits and how, we’ll start by looking at what’s in gasoline. Or rather, what else is in gasoline. The EPA legally allows endless amounts of other chemicals and additives in gasoline which all evaporate at different rates. Thinner compounds tend to go first, then the heavier additives. This can clog up your fuel system.

Although this is something to make note of when storing your vehicle, fuel stabilizers are anti-evaporative. At least, they claim to be. Researchers found when testing popular stabilizers such as Sta-Bil, StarTron, SeaFoam, STP, K100, and Ipone, this wasn’t the case. Even so, this doesn’t necessarily mean that all fuel stabilizers are the murder weapon. Modern gasoline is partially ethanol, an alcohol that lessens gasoline’s negative effect on the environment. Ethyl alcohol is also hygroscopic meaning it tends to absorb moisture from the air. After it absorbs too much, the particles will no longer be suspended throughout the liquid and sink to the bottom. 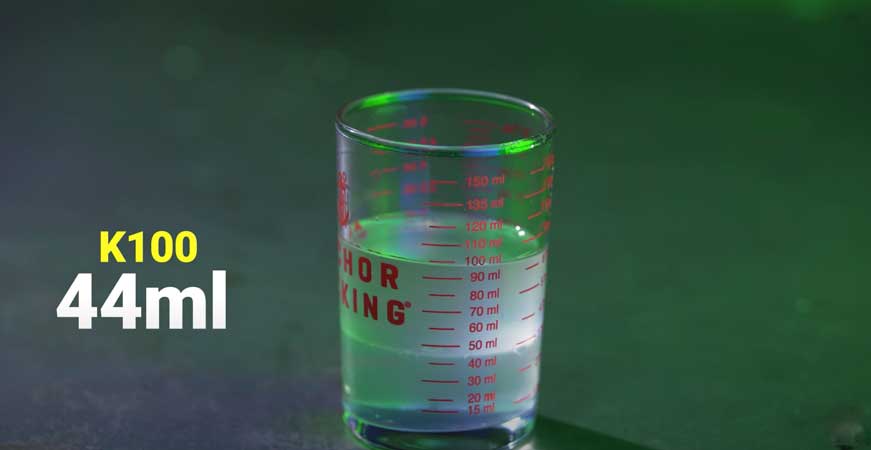 This is why fuel stabilizers claim to be hydrophobic; to prevent the attraction to water in ethanol. When treating popular stabilizers with ethanol, K100 and StarTron actually drew more water. But stabilizers also contain methanol, a water-soluble fuel. If they blend instead of creating layers, they can help it burn away. In another test, researchers soaked paper in the ethanol and stabilizer solution and tried burning it. Every one burned except Ipone, which fizzled out. 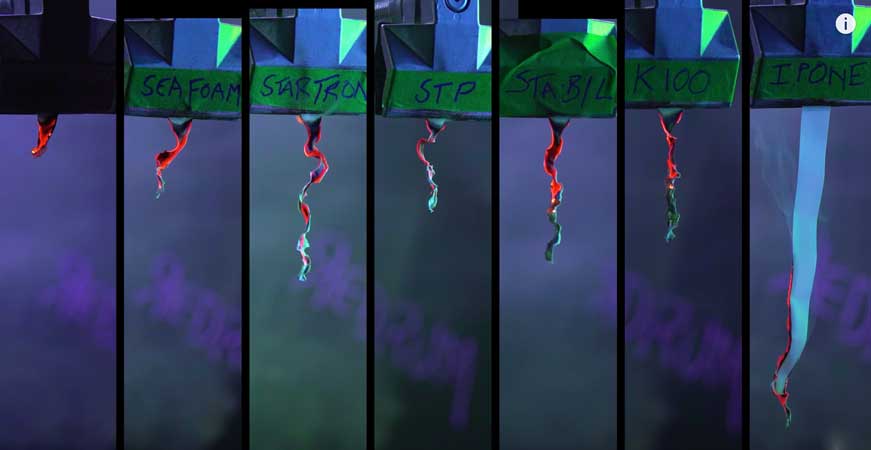 Another issue is that water can freeze. Stabilizers also have anti-freeze properties. To put these properties to the test, researchers froze the ethanol stabilizer samples. Ipone and K100 froze within five hours while the rest stayed liquid. 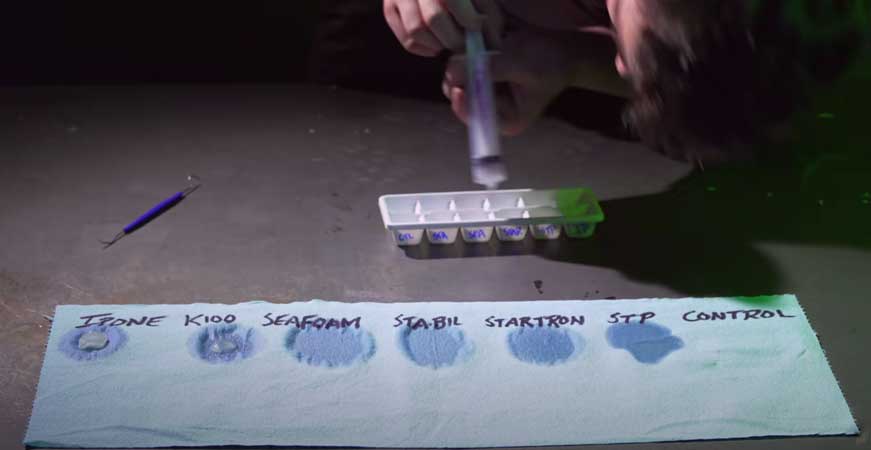 Of all of the ethanol's faults, oxygenation is the worst. On one hand, you want an oxidizer in your fuel because oxygenated gasoline burns more completely leaving fewer emissions in the environment. On the other hand, the quicker the fuel oxidizes, the quicker the fuel goes bad. Fuel stabilizers have antioxidants in them which prevent redox reactions from eating away at the engine.

So in another test, researchers dropped a small piece of metal in the ethanol stabilizer solution to see any deterioration. Every solution saw deterioration except for K100. Ipone and Sta-Bil saw smaller amounts of erosion while StarTron and SeaFoam were easily the worst. 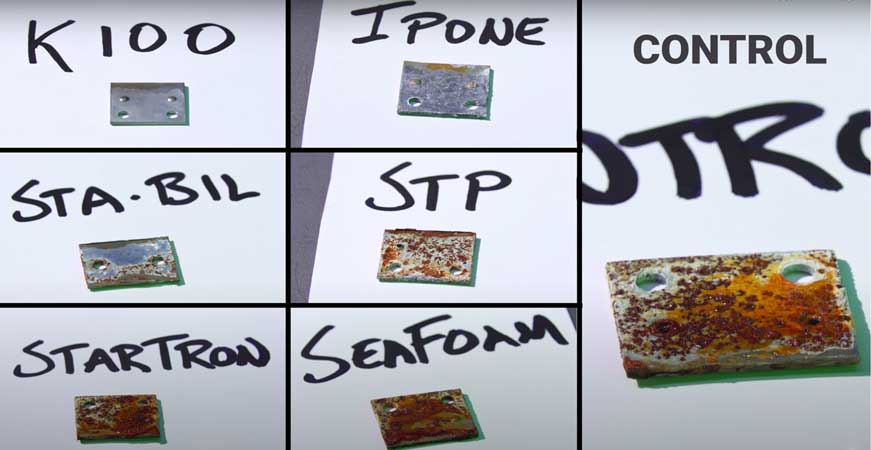 Although there are many ways an engine can go bad during winter storage, it is this oxidation that we see most typically kill cars.

In conclusion, ethanol is an accomplice to pretty much every storage crime. If you can fill your car with ethanol-free gas, you’re more likely to have fewer storage issues. However, we know that’s easier said than done. If you can’t get ethanol-free gas, fuel stabilizers don’t generally help much. The only exception is oxidation protection which only K100 does best. Just keep in mind is also freezes fast. Stabil is another tempting choice limiting water ingress.

I've owned this car for more than 15 years and have spent the best part of that time restoring it a little at a time. It's not a factory number matching car, so I've taken some "liberties" with the restoration to make it more enjoyable to drive, including upgrading suspension, brakes, and driveline.

The Original Air parts are the hoses, drier, and expansion valve.