My Father passed away when I was in high school. I decided that I would pursue an auto mechanic career. To gain experience, I restored a 1968 Camaro. I purchased the car in pieces without a motor. By the time I graduated, I had a mint condition Camaro with a 1963 corvette motor. It was an incredible car. The local police also had it on their “radar.”

As it turned out, I was in love with my high school sweetheart. However, her father was transferred to Santa Fe. Of course, I had to follow her, so I found a college in Santa Fe to attend. I also planned on taking my Camaro. My mother had different plans for my Camaro. Unfortunately for me, I was not 18 when I purchased the car; the title was in her name.

My father was a salesman and every two years he would take the family to Eddie Ruch Pontiac in Wheaton Illinois to order our new Pontiac Catalina. Harry Toft was our “family” salesman. Because my Camaro was popular with the local police, my mother was not going to let me take it to Santa Fe. Instead, we were going to see Harry to purchase a car she would consider safe for me. My grandfather had passed away and I had inheritance money. My mother insisted I would use this money to purchase a new car. She also informed me she did not care if she only got a dollar for my/ her Camaro, I was simply not taking it.

I had two weeks to sell my Camaro! You can imagine I was not a happy customer. Harry showed us a Grand Am and bragged that it was a “sporty” car for me. My mother made me buy the car just a few days before I was to leave for Santa Fe. I was very angry. My Grand Am was in both of our names. My mother passed away many years ago and it wasn’t until last year that I finally obtained a title in my name.

To make things worse, my mother insisted on riding with me to Santa Fe. A few days prior to departure, I decided to actually give the car a chance and started to check it out. Whoa! I discovered it had a 4 barrel 400 ci engine. I could easily get a 2nd gear scratch. And it was an AUTOMATIC!

During the drive to Santa Fe, I discovered my Grand Am had many “deluxe” accessories. It had fully reclining seats with lumbar adjustment, awesome dome light, headlight bright dim switch on the blinker arm, excellent stereo 8 track, cockpit-style seating and great console, full gauges, tilt steering wheel, and incredible handling (RTS was new). But most of all, the car was fast. I buried the speedometer many times on long stretches of I 40 (old 66 from Chicago to Albuquerque). The car was so smooth, my mother had no idea. I LOVE THIS CAR!

My fellow students at the College of Santa Fe loved it also. More importantly, my girlfriend and her parents loved my Grand Am. I still maintain close contact with her parents (I did not marry their daughter) and they still love my Grand Am 47 years later. Below is a photo with my college friend Rubin at a rest stop at Tucumcari New Mexico. l wanted to look like Hank Williams, Jr. The other is a picture of my car at a stream in the Pecos. Yes, I did drive the car into the stream. I paid a price for doing it. I crunched in my gas tank. To this day, my gas tank wears the patch from this adventure. 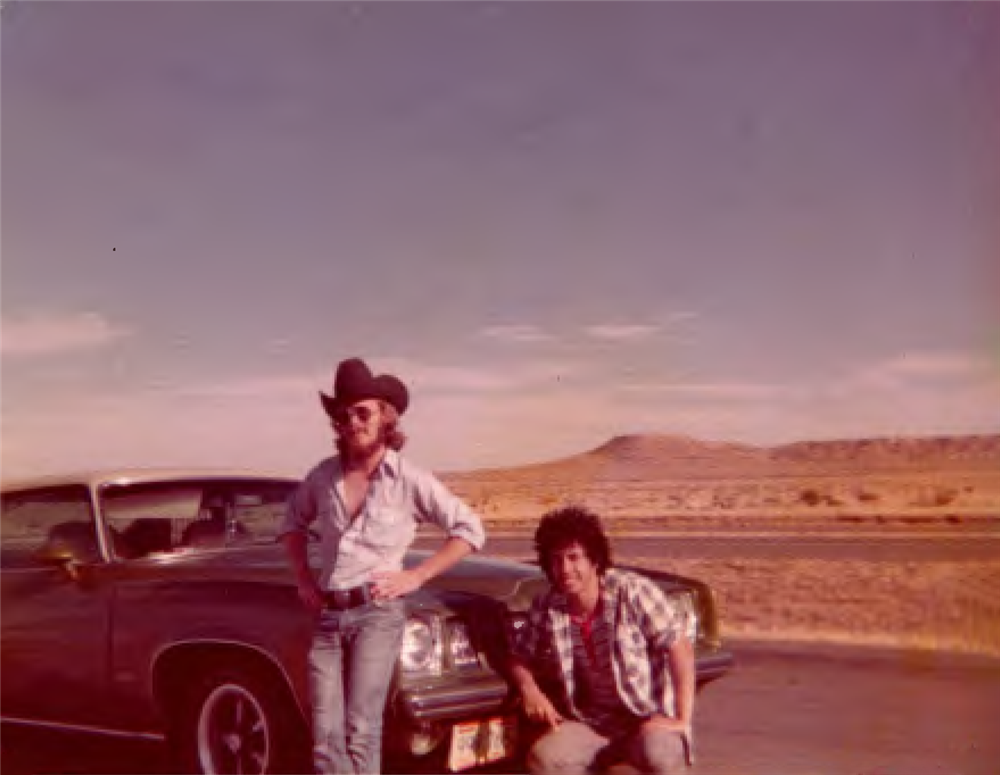 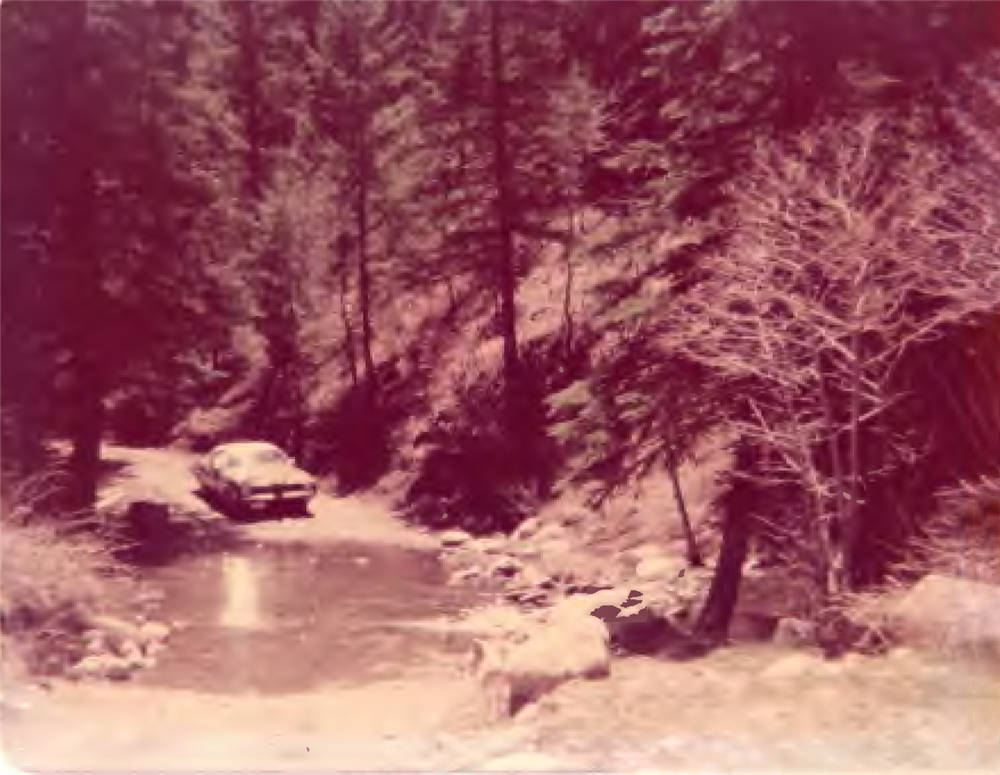 Other stories significant to the car's condition you ask? I fell asleep on the enchanted trail outside Albuquerque and smacked a guardrail hard. The car's solid frame took the blow well, but my rear-view mirror flew off and cracked. Every time I look into my rear-view mirror, I still see the crack. Last story- I was driving down Cerrillos road in Santa Fe very early in the morning. A 1969 Pontiac GTO ran a red light and I T-boned it. Again, my Grand Am came through ok, but it needed a new hood. The only hood the Pontiac dealer in Albuquerque had was the hood with the vents. Damn the luck. The GTO was sadly decimated.

The car served me well while I served twenty years in the Navy. The pictures are of me at Officer Candidate School (OCS) in 1979 at NAS Pensacola. Shortly after school, I painted the car black. The car could not get any cooler! 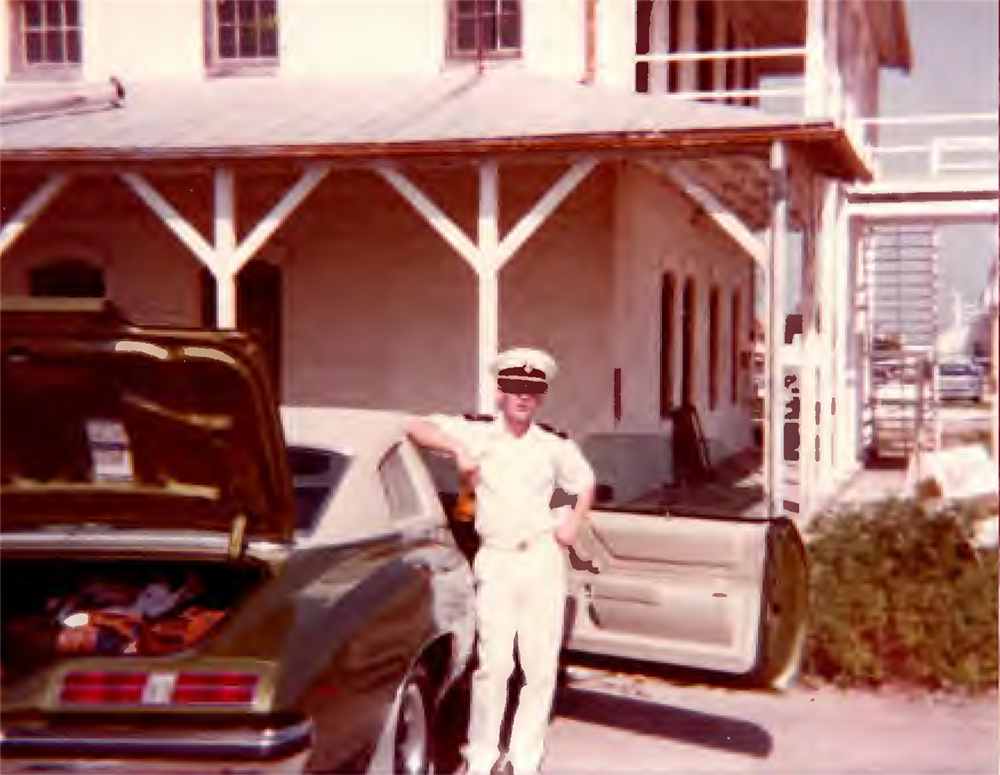 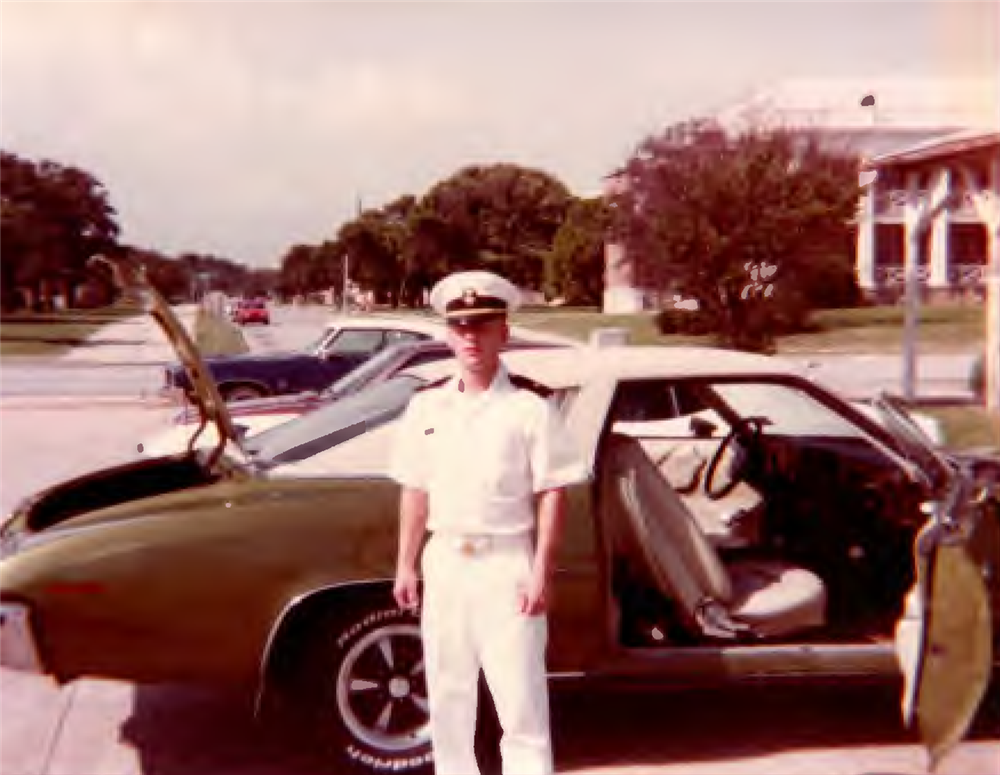 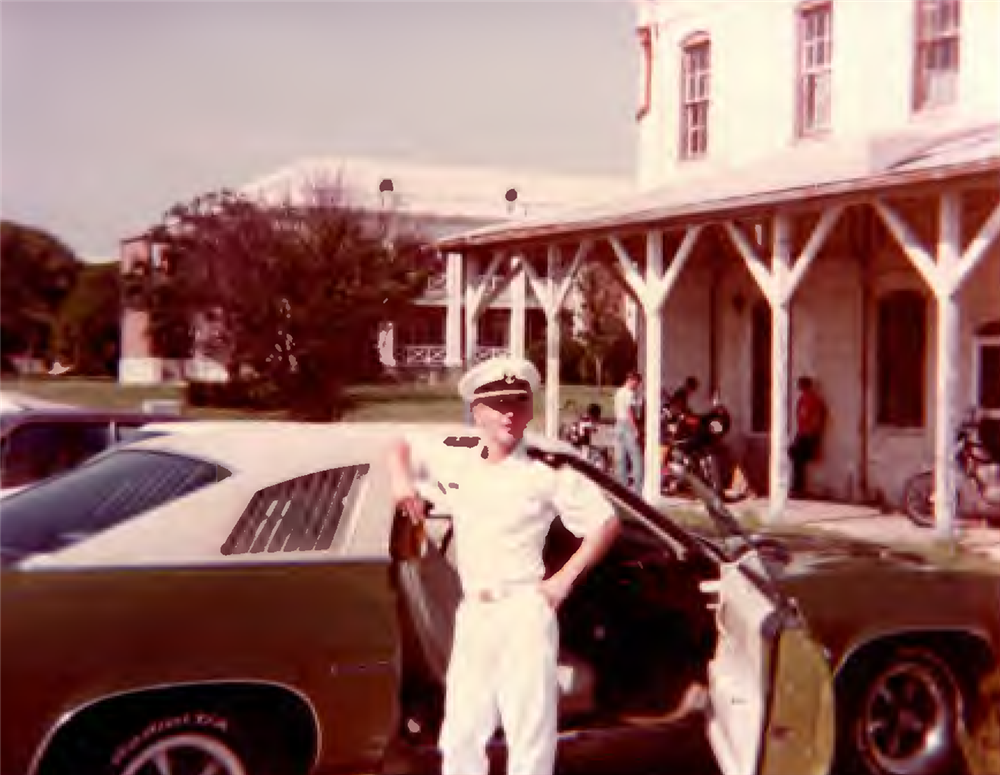 In the mid-nineties, I decided to paint the car white. Not as cool as black, but I still loved my Grand Am. At over 200,000 miles on the motor, my Grand Am showed no signs of slowing up. With pride, it could still deliver a second gear scratch. I guess changing the oil frequently works for keeping the motor healthy. The car moved to San Diego in 1982.

In 1998, I decided to perform a frame-off restoration and rebuild the motor. All mechanical parts were rebuilt as well as all fluid lines. The car was nearly 80 percent complete. I was getting very anxious to drive the car again. Attached are photos during the frame off restoration. 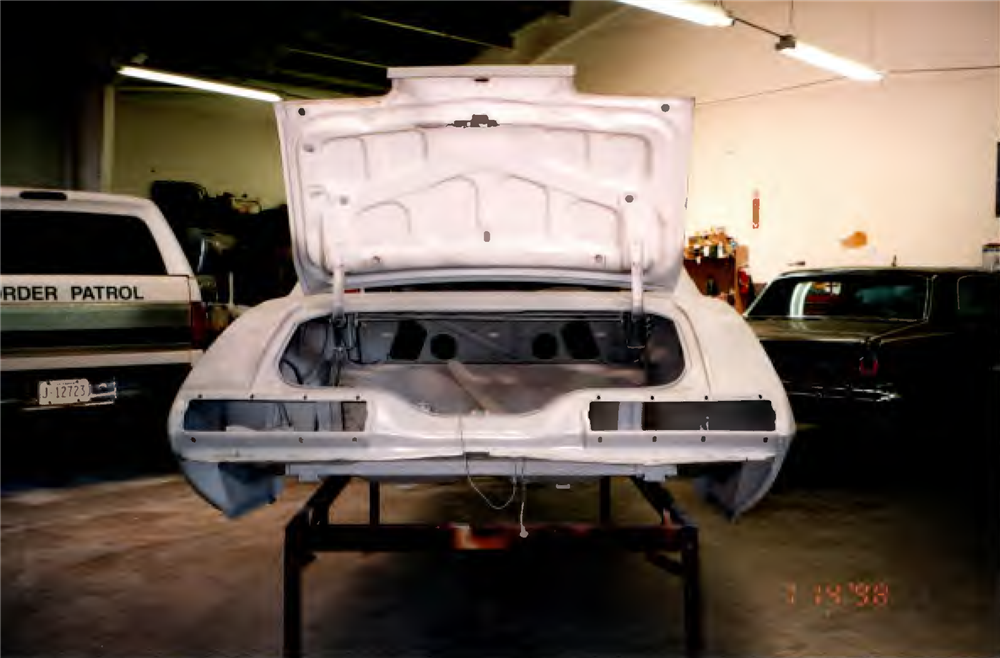 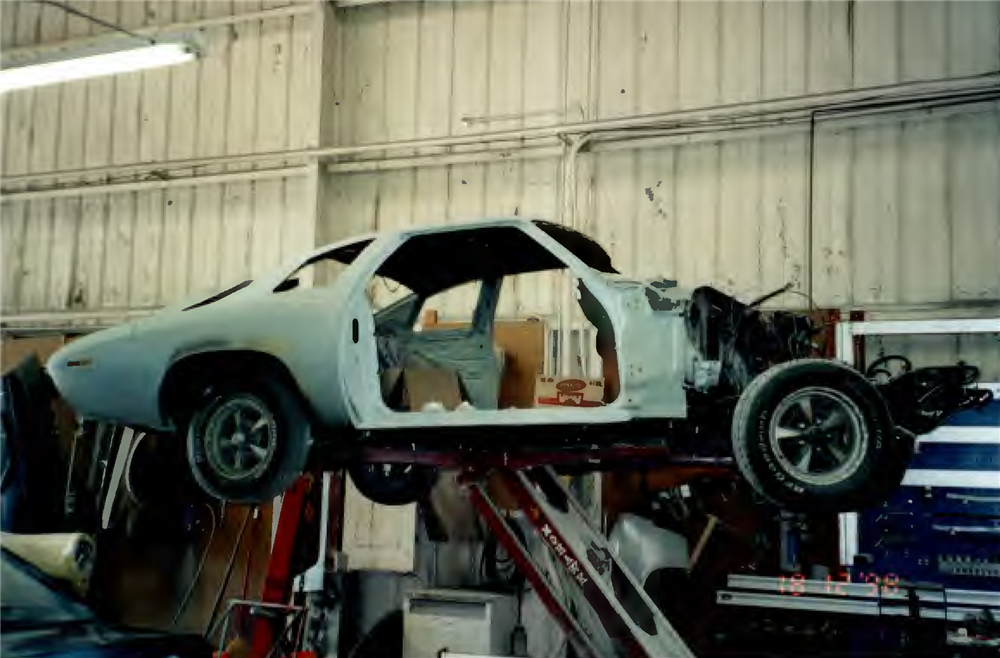 I returned from an extended Navy deployment. My new girlfriend was anxious to see my Grand Am, so we went to the body shop to see it. Hopefully, the car was completed. To our horror, the shop was abandoned and there was no sign of my car, as well as the other classic muscle cars that were also in restoration. None of the neighboring stores knew where the cars went. The sheriff’s department was not any help. My Grand Am was gone!

I married this girlfriend and was living a great life. When I was approaching my 55th birthday, I decided I was going to spend much time looking for my Grand Am. I canvased many neighborhood auto body shops in East San Diego. Bingo, I found the shop owner working at a small body shop.

Needless to say, he was surprised I found him after 13 years. Tom, the man who stole my car, told me he had my car and its parts in storage all these years. He had a terrible excuse that he could not contact me by phone. To this day, I still have the same phone number. You can see I keep things for a long time. The owner of the body shop had much sympathy for me and offered me one of his bays.

For Tom, storing the car all those years was partially true. I met him at Ace towing in east San Diego to see my car. The Ace owner, Tom, and I walked to a remote area in the desert lot and found my car. Attached are the pictures of my Grand Am in the wrecking yard. The owner told me Tom had run out to put the blue tarp on before I arrived. As you can see, the car was in horrible condition. I was saddened as I thought I was saying goodbye to my Grand Am. Tom had not paid any fees. I was amazed the owner kept the car. Thirteen years of storage fees added up to thousands of dollars.

I decided to go for it. I wanted my car. I stuck a deal to have the car delivered to the body shop for $1800. The owner made Tom perform much of the work after hours. And for free.

The motor that was rebuilt was now rusted solid. My motor was on the limits of not being able to be rebuilt. However, it made it back to my Grand Am. Attached are pictures after it was painted. I decided to restore my Grand Am the way I found it in the showroom. That was late 2011. I worked on the car until late 2013.

You can get every part for a Pontiac A body for 1972 and prior. Obtaining parts for my Grand Am took years of phone calls and internet search. The great news is that Tom had most of my interior parts at an indoor storage facility.

During this 2nd restoration, I ran out of money and time and the car sat in my garage for 6 years. Reenergized with money and time, about a year ago I decided to finish the car. Last June, I drove the car for the first time since 1998. Oh yeah! Baby is back! My car’s nickname from my Navy buds was the “Mag.” Short for magic. The car really is magic. I loved to hear, “How’s the Mag doing?” 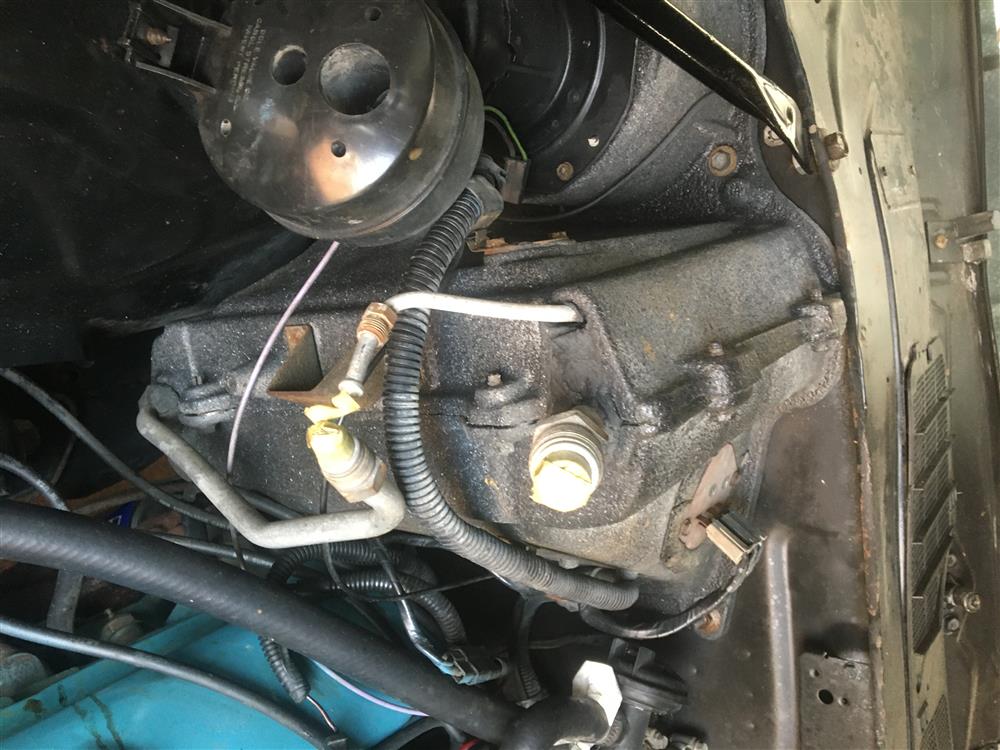 I was delighted to find Classic Air to restore my air conditioning system. I look forward to installing the system when the restoration of my AC parts is completed. I also look forward to working with their technical department folks to help me with the install. They are super.

Attached are pictures of my car in front of my house. I have to finish the wheels, emblems, and chrome. My goal is to take a road trip back to the places significant to the car's past as well as visiting friends that have “history” with the car. I also plan on attending car shows when the care is complete. I have to install the interior panels of which I have. Plus, there is much detail work like getting the clock to run, the horns to work, or the windshield wipers and washers to operate. The electrical system was a nightmare to restore with all the damage to the fuse boxes and wiring. It all works and with nearly all of the original wiring.

I am truly amazed I still have this car. My daughter is 17 and she is discovering how great it is to have this car in the family. She is probably the only student in her school that knows what a carburetor is and has actually seen one get rebuilt and working. Not to mention hear the secondaries open and feel the car lurch.