For full step by step please visit this article

In ’80, Pontiac introduced the new R4 A/C compressor to some of its Trans Ams and Firebirds. Weighing in at nearly half the mass of the long-in-the-tooth A6 compressor, the R4 continued in the F-body line through ’92. It has earned a reputation as an unreliable design because it was prone to body and shaft-seal leaks, and seizing up due to the lack of an oil pan for oil storage. 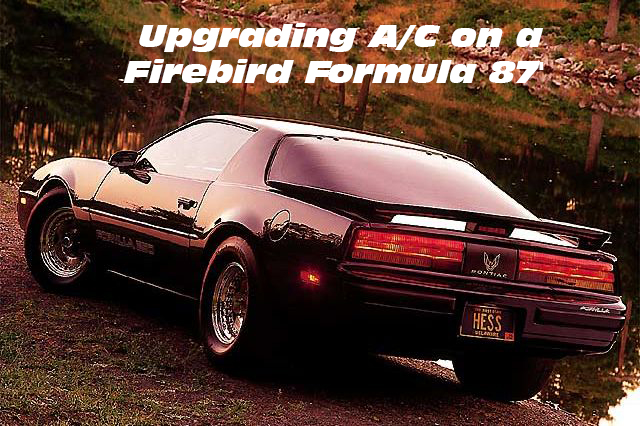 Aftermarket replacement compressors have been available to consumers since the ’80s, but their focus was on reproducing the original, flawed part, without coming up with something better. Enter Classic Auto Air of Tampa, Florida, whose Original Air Group is dedicated to designing direct-fit upgrade A/C kits using modern R134a refrigerant (it’s no longer called freon!) in classic Pontiacs.

“There’s a growing demand for replacement A/C components for Third-Gen F-bodies, and ’80s-era G-bodies,” says Classic Auto Air’s marketing/product development guru Dan Acosta. “The factory R4 compressor has proven to be the most common cause of A/C component failure in Third Generation Trans Ams and Firebirds. Most of these vehicles had factory air conditioning, and many of them are in need of repair and/or updating.”

It’s time for the Stage 3 kit to be installed. Classic Auto Air’s team slid the new condenser into its space and made sure it mounted onto the two lower OE bushings. (Steps not shown: The men attached the upper OE bushings; aligned the upper-radiator-support cover and bolted it back into place, and aligned and fastened the air-plenum brace to the core support.

So far this year, Classic Auto Air has introduced direct-fit kits for ’86-’87 and ’88-’92 V-8–powered T/As and Firebirds. (Kits for ’82-’85 Third-Gen F-bodies and ’82-’87 G-body Grand Prixs are in the works; custom systems for these years are already available.) “In addition to keeping your vehicle worry-free cool, these high-performance kits reduce parasitic horsepower loss, which results in as much as a 5hp gain, and can safely operate up to 6,000 rpm,” Acosta says.

Classic Auto Air says that the above steps can be accomplished by DIY mechanics, but evacuating and charging the new A/C system should be left to a licensed A/C professional. This particular vehicle took approximately 1.69 pounds of 134a refrigerant. The A/C technician must calculate the amount of 134a, which is generally 70-80 percent of the amount of R12 specified for the vehicle. That information is usually found on an evaporator-case decal or in the vehicle’s service manual.

Compressor upgrade, which replaces the unreliable and poor-performing R4 compressor with the dependability and efficiency of the modern rotary-style compressor
PN 23-261
MSRP $399.99